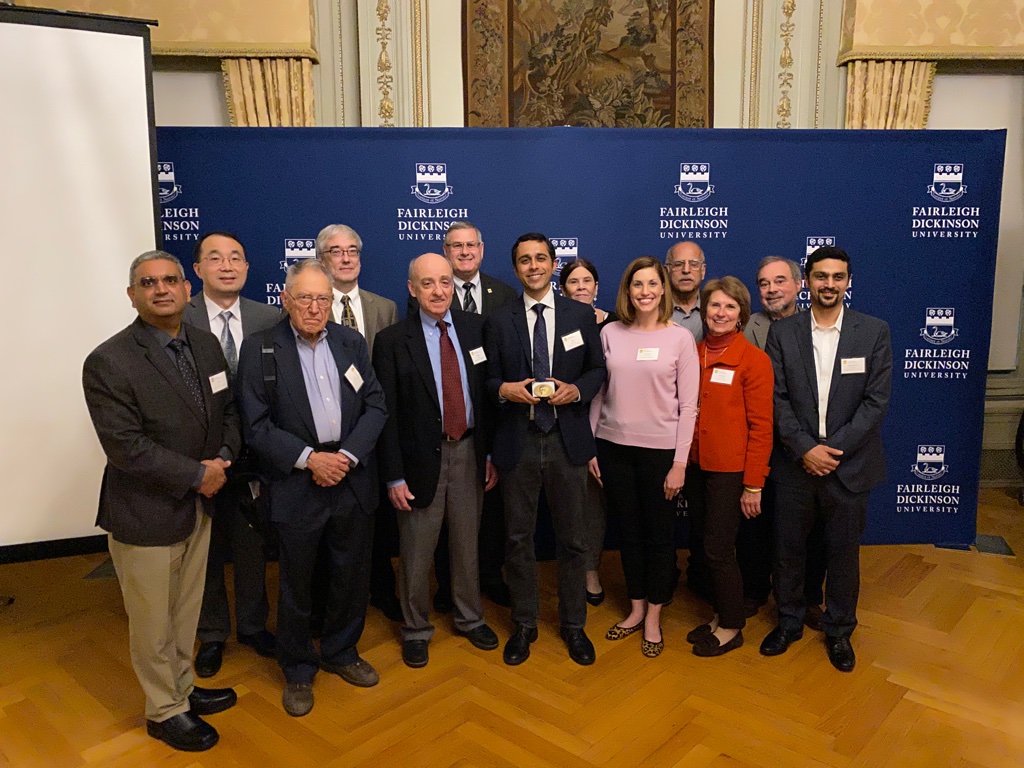 Getting there: The symposium takes place on the Florham Campus of Fairleigh Dickinson University. Although the campus has an entrance from Madison NJ, if you are driving you should use the entrance at 175 Park Ave, Florham Park NJ 07932. The meeting room is Lenfel Hall, which is located in one of the main buildings on campus, called Hennessy Hall, or “The Mansion”. Navigating the campus is tricky, but Google Maps knows some locations and roads on the campus, so this link gets you to the front of Hennessy Hall:
http://maps.google.com/?q=Hennessy+Hall,Mansion+Mall,+Florham+Park,NJ.
As usual with Google Maps, you can click the “Directions” link to the left of the map to get turn-by-turn directions.

This will help you locate Parking Lots 2 & 8 and how to walk from the parking lots to Hennessy Hall. As you drive onto campus you’ll stop at a guard house, and they can help with directions, as well. For planning purposes, please note that it’s a 9 minute walk from the parking lots to The Mansion. If you need handicap parking, ask at the guard house.

Neal K. Devaraj is a Professor of Chemistry and Biochemistry at the University of California, San Diego. A major research thrust of his lab involves understanding how non-living matter, such as simple organic molecules, can assemble to form life. Along these lines, he has developed approaches for the in-situ synthesis of synthetic cell membranes by using selective reactions to “stitch” together lipid fragments. His lab's work has enabled the first demonstration of perpetually self-reproducing lipid vesicles and artificial membranes that can dynamically remodel their chemical structure. Recently, his lab has demonstrated that in situ synthesis can assemble lipid species within living cells, enabling studies that decipher how lipid structure affects cellular function.

Raised in Manhattan Beach, California, Prof. Devaraj left the west coast to pursue undergraduate studies at the Massachusetts Institute of Technology, graduating with dual bachelor's degrees in Chemistry and Biology. He earned his doctoral degree in chemistry from Stanford University under the mentorship of Prof. James Collman and Christopher Chidsey. After a postdoctoral fellowship with Prof. Ralph Weissleder at the Harvard Medical School, he joined the faculty of Chemistry and Biochemistry at the University of California, San Diego. His work has been recognized by the 2016 National Fresenius Award, the 2017 American Chemical Society Award in Pure Chemistry, being selected as the 2018 Blavatnik National Laureate in Chemistry, and the 2019 Eli Lilly Award in Biological Chemistry. In recognition of his contributions to teaching, Dr. Devaraj was named a 2016 Camille Dreyfus Teacher-Scholar.

Sidney Hecht obtained his Ph.D. in Chemistry at the University of Illinois. Following studies as an NIH Postdoctoral Fellow in Molecular Biology at the University of Wisconsin, he was a member of the MIT Chemistry faculty from 1971-79. He was the John W. Mallet Professor of Chemistry and Professor of Biology at UVa from 1978-2008. From 1981-87 he held concurrent appointments at Smith Kline & French Laboratories, first as Vice President Preclinical R&D, then as Vice President Chemical R&D. Since 2008 he has been Director of the Center for BioEnergetics in the Biodesign Institute, and Professor of Chemistry at Arizona State University. He has been an Alfred P. Sloan Fellow, and a John Simon Guggenheim Fellow. Hecht received the 1996 Cope Scholar Award of the ACS and was selected as Virginia's Outstanding Scientist for 1996. He received the 1998 Research Achievement Award of the American Society of Pharmacognosy and is a Fellow of the American Association for the Advancement of Science, and of the American Society of Pharmacognosy. He received the ASU Faculty Achievement Award in Defining Edge Research: Innovation (2011) and was recently elected a Senior Member, National Academy of Inventors (2019). He has been an Associate Editor of the Journal of the American Chemical Society since 1992.

His research interests include the synthesis and mechanism of action of bleomycin group antitumor agents. He identified DNA topoisomerase I as the locus of action of the alkaloid camptothecin and participated in the discovery and development of the camptothecin analogue topotecan, marketed under the trade name Hycamtin for the treatment of ovarian cancer and small cell lung cancer. At ASU, his Center is studying the chemistry of the mitochondrial electron transport chain with the goal of devising therapeutic strategies to treat mitochondrial diseases. Other research interests include the elaboration and study of proteins containing synthetic amino acids. He has published more than 460 research papers and has supervised more than 250 graduate students and postdoctoral associates.

Dr. Patel's research achievements have been recognized through receipt of the AT&T Bell Laboratories Distinguished Technical Staff Award (1983), the Distinguished Alumnus Award of New York University (1997) and the FEZANA Jamshed and Shirin Guzdar Excellence in Profession Award (2014). In 2019, he received the Lifetime Achievement Award of the American Association of Indian Scientists in Cancer Research and the inaugural Tan Jiazhen International Collaboration Prize. He has served in the past on the Scientific and Medical Advisory Boards of the Howard Hughes Medical Institute (1989-1996) and the National Cancer Institute (2000-2005). He currently serves on the Scientific Advisory Boards of the European Institute of Chemical Biology, Bordeaux, France (2009-), the Institute of Research in Biomedicine, Barcelona, Spain (2011-), the Beijing Advanced Innovation Center for Structural Biology, Tsinghua University, Beijing, China (2016-), the School of Life Sciences and Technology, Harbin Institute of Technology, Harbin, China (2017-), the Biology Department of Southern University of Science and Technology, Shenzhen, China (2019-) and Shenzhen Bay Area Laboratory, Shenzhen, China (2019-). In recognition of his scientific contributions, Dr. Patel was elected to the National Academy of Sciences in 2009 and the American Academy of Arts and Sciences in 2014.

Amanda Garner received her Ph.D. in Chemistry from the University of Pittsburgh working under the supervision of Prof. Kazunori Koide and completed NIH-funded postdoctoral studies in the laboratory of Prof. Kim Janda at The Scripps Research Institute. She began her independent career in 2013 in the Department of Medicinal Chemistry at the University of Michigan. Her laboratory uses chemical biology, medicinal chemistry and molecular and cellular biology approaches to investigate the high-risk/high-reward areas of targeting microRNAs, RNA-protein and protein-protein interactions for probe and drug discovery.

Registration deadline is November 22, 2019 – Extended to Dec 4. Note: Students must register for $5, but their $5 will be refunded at the door