Undergraduates in the North Jersey area who are majoring in Chemistry are welcomed as members by the ACS with reduced membership fees. Among other activities, the Student Affiliate members and their advisors organize an annual Research Conference.

New this year, the North Jersey Section is offering several travel grants to undergraduates to travel to ACS meetings to present papers and posters

Sixty-Second Annual Research Conference of the Intercollegiate Council of the Student Affiliates Chapters, No. Jersey Section

On Friday April 23, 2010 the Sixty-Second Annual Research Conference of the Intercollegiate Council of the American Chemical Society Student Affiliate Chapters, North Jersey Section organized by Dr. Adam Cassano was held at Drew University in Madison, NJ. Eleven undergraduate students from five different universities were hosted by the Drew University Chemical Society as they presented their research for an audience of students and faculty from the North Jersey area. The three judges, William Leong (Celgene), Boli Zhou (BZ Plating Process) and Bill Suits (ACS) had a very difficult job as they judged the student presentations and selected the top three presenters.

First Place and the Jean Asell Duranna Award was given to Mr. Greg Pirrone from Fairleigh Dickinson University and mentored by Dr. Amber Flynn Charlebois, for his presentation, “Synthesis of Stercobilin and its Deuterated Isotopomer: ESI and MS/MS of a Potential Autism Biomarker.”

Ms. Chynna Broxton from The College of Saint Elizabeth was given the second place award for her presentation, “Progress Toward a Three-way Nucleic Acid: Switch for Human Alpha Thrombin” from her REU at Syracuse University under the direction of Dr. Janet Berthel and Dr. Phillip Borer.

And the third place award went to Ms. Laurie A. Woodill for her presentation, “Heterogeneous Reactions of Surface-Adsorbed Catechol with Nitrogen Dioxide: Substrate Effects for Tropospheric Aerosol Surrogates.” Laurie is from Drew University and was mentored by Dr. Ryan Hinrichs.

The award certificates will be formally presented to the winning student presenters at the North Jersey Section’s Annual Awards Dinner scheduled for Tuesday May 18, 2010 in Lenfell Hall at Fairleigh Dickinson University. 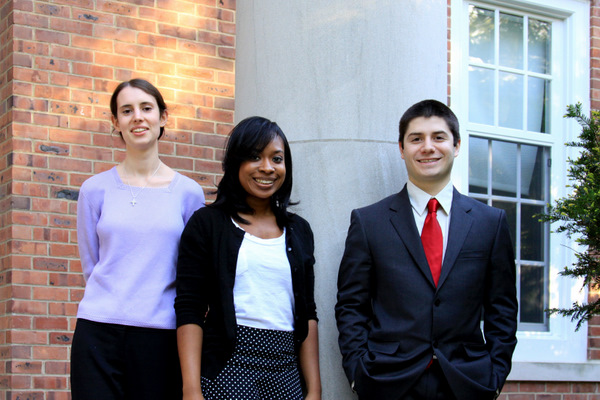