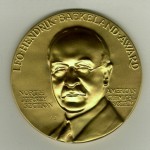 Every two years the North Jersey Section of the American Chemical Society presents the prestigious Leo Hendrik Baekeland Award to an exceptional younger chemist. The award consists of a gold medal and a $5,000 honorarium. It serves to commemorate the technical and industrial achievements of Leo Hendrik Baekeland and to encourage younger chemists to emulate his example.

The Award is given in recognition of accomplishments in pure or applied chemistry to a US-based chemist as characterized by the initiative, creativeness, leadership, and perseverance of the individual (indicated by published or unpublished evidence) and who will be under the age of 40 as of January 1 of the award year.

The Baekeland Medal is presented to the honoree at a Section-wide banquet and research symposium usually held in December of the award year.

Nominations for the Award should include a letter describing the nominee’s achievements, a brief biography, and a list of the nominee’s more important publications. Successful nomination packets include two to three recommendation letters supporting the candidate.

Re-nominations are encouraged, provided the age requirement is still met.

Please submit materials by January 1 of the award year to: